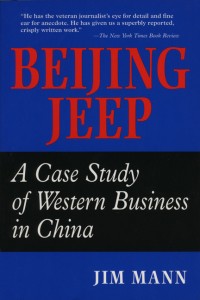 The story of how AMC’s 1979 joint venture to produce Jeeps in Beijing ended in tears is perhaps the closest thing to a classic work on doing business in post-Mao China. It’s required reading for anyone venturing to the world’s most populous nation.
— Fortune

“I greatly enjoyed the first edition of Beijing Jeep which I found to be fast-paced, informative, and sadly funny. I am confident this update will tug new readers into the arcane world of doing business in China.”
— Jonathan Spence, Yale University

“Any businessman, government bureaucrat, tourist, or journalist who wants to know how business is actually done in China must read this book. It is honest and accurate, well written and interesting, whether read as history or as a record of current events. So much that has been written about China business is either self-serving or propagandistic—to wit, if you want the deal, you sing our tune. This book, in contrast, tells it as it was and as it is. And could have been written only by a perspective journalist like Jim Mann who was present at the creation.”
— James R. Lilley, Asian Studies, American Enterprise Institute; former U.S. ambassador to China, 1989–1991

“A lively and engaging cautionary tale that should be required reading for anyone thinking of doing business in China. No one understands Chinese business practices or tells the story better than Jim Mann.”
— Warren I. Cohen, Asia Program, Woodrow Wilson International Center for Scholars

“Even today [1994], five years after its first publication, Beijing Jeep remains one of the best—if not the best—book-length account of doing business in China because of its tale of the hidden agendas that underpinned many of the major problems at the first Sino-foreign vehicle joint venture.

At the book’s core are the revelations of the lengths the Chinese government was willing to go to create a large-scale joint venture with a major overseas company that on the surface appeared successful.

A venture that seemed to make money—whatever its actual problems were—would not only attract other business from abroad but convince firms already in China but struggling that success was possible, and thus more likely to blame themselves for failure rather than the environment in which they operated.

“Bejing Jeep should still be part of the basic tool kit of any foreign business person in China—with one caveat: although foreign firms often feel victimised, it would be a mistake to see all attempts at squeezing them dry as part of a straightforward ‘them against us’ battle. As the recent attempt by the National Environmental Protection Agency to introduce regulations that heavily discriminate against foreign firms reveals, the motives can have far more to do with jockeying for power between Chinese government bodies. It can also make the task of locating partners, especially powerful ones or ones in sensitive industries such as telecommunications, doubly problematic. The example of Ji Tong Communications is illustrative.”
— EIU Business China

“A case study of China and the business to be done there…. Smoothly written.”
— The Wall Street Journal

“He has the veteran journalist’s eye for detail and fine ear for anecdote. He has given us a superbly reported, crisply written work.”
— New York Times Book Review

“If you think the Soviet bloc’s upheavals will create instant riches for Western investors, Beijing Jeep will sober you up.”
— Robert J. Samuelson, Newsweek