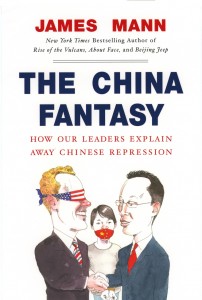 One of our most perceptive China experts, James Mann has penned a vital wake-up call to all who are ignorant of America’s true relationship with the Asian giant.

Our leaders may posit a China drawn to increasing liberalization through the power of the free market, but Mann asks us to consider a very real alternative: What if China’s economy continues to expand but its government remains as dismissive of democracy and human rights as it is now?

Calling for an end to the current policy of overlooking China’s abuses for the sake of business opportunities, Mann presents a must-read book for anyone interested in global affairs.

“From Clinton to Bush to Obama, the prevailing belief was engagement with China would make China more like the West.
Instead, as Mr. Mann predicted, China has gone in the opposite direction.”
—Jane Perlez and Javier Hernandez, “President Xi’s Strongman Rule Raises New Fears of Hostility and Repression” New York Times, Feb. 25, 2018

“Ten years ago the journalist James Mann published a book called The China Fantasy, in which he criticized American policymakers for using something he called “the Soothing Scenario” to justify the policy of diplomatic and economic engagement with China. According to this view, China’s exposure to the benefits of globalization would lead the country to embrace democratic institutions and support the American-led world order. Instead, Mann predicted, China would remain an authoritarian country, and its success would encourage other authoritarian regimes to resist pressures to change. Mann’s prediction turned out to be true.”
—Andrew Nathan, “The Chinese World Order,” The New York Review of Books, Oct. 12, 2017