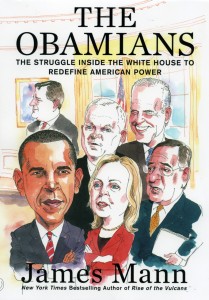 “James Mann is unique among writers on contemporary American foreign policy. He combines a reporter’s eye for detail and anecdote with a scholar’s grasp of the broad sweep of historical events.” –Aaron Friedberg, professor of politics and international affairs, Woodrow Wilson University

The Obamians was a New York Times Editor’s Choice

DISCUSSION AND COMMENTARY ABOUT THE OBAMIANS

“James Mann gives us valuable insight into the crafting of American foreign policy in the Obama administration.”  –Nancy Pelosi

“James Mann has pioneered a new and immensely readable genre: an in-depth group portrait of foreign-policy advisors whose backgrounds and interactions help explain the worldview and policies of the president they serve. He did that superbly in Rise of the Vulcans about George W. Bush’s inner circle, and he’s done it again with The Obamians.  –Strobe Talbott, president, The Brookings Institution

“An absorbing narrative as much about the personalities as the policy itself. This book is for serious and thoughtful readers of any political persuasion looking for in-depth information on Obama’s foreign policy thus far.” –Library Journal

“This book effectively represents a companion volume to Mann’s well-regarded Rise of the Vulcans (2004), which explored the ascendancy of neoconservatives in President George W. Bush’s administration. Taking a similar approach here, Mann proves to be a deft, discerning reporter.” –Kirkus