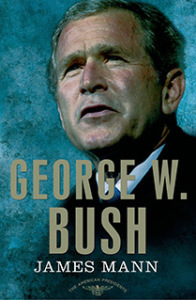 George W. Bush stirred powerful feelings on both sides of the aisle. Republicans viewed him as a resolute leader who guided America through the September 11 attacks and retaliated in Afghanistan and Iraq, while Democrats saw him as an overmatched president who led America into two inconclusive wars that sapped the nation’s resources and diminished its stature. When Bush left office amid a growing financial crisis, both parties were eager to move on.

In this assessment of the nation’s forty-third president, James Mann sheds light on why George W. Bush made the decisions that shaped his presidency, what went wrong, and how the internal debates and fissures within his administration played out in such a charged atmosphere. He shows how and why Bush became such a polarizing figure in both domestic and foreign affairs, and he examines the origins and enduring impact of Bush’s most consequential actions-including Iraq, the tax cuts, and the war on terror. In this way, Mann points the way to a more complete understanding of George W. Bush and his times.

“[Mann weaves] extensive interviewing and archival research to produce insightful analyses and fresh perspectives on our own times.… George W. Bush is also the relatively rare book about our 43rd president that could be read appreciatively by both supporters and detractors.… Mann adopts an almost studied neutrality, adhering for the most part to the unbiased tone of the newspaper reporter.”
—The Washington Post

“The latest volume in the American Presidents series meets its goal of providing a concise yet thorough biography of the 43rd president. Mann’s claim that Bush’s tenure ‘was, by any standard, one of the most consequential presidencies in American history’ is made from a balanced assessment of the facts.” —Publishers Weekly

“[Bush’s tenure] occurred ‘at a critical juncture in American history’…. As president, that critical juncture overtook him, first and foremost on 9/11 but as fatefully later with Hurricane Katrina and the 2008 financial crash…A sober overview.”
—Booklist